Festschrift for Prof. Kerala J. Snyder
JavaScript is disabled for your browser. Some features of this site may not work without it. 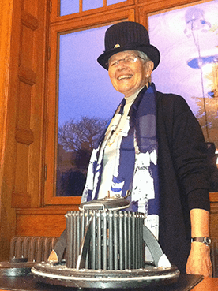 We are proud to announce our newest publication: a digital Festschrift for Prof. Kerala J. Snyder, who holds an honorary doctorate from the University of Gothenburg.

Doctor Honoris Causa, 22 October 2010 Final preparations the day before the ceremony ***** Prof. Snyder helped establish a decades-long fruitful collaboration between her home institution – the Eastman School of Music, University of Rochester, New York – and the Academy of Music and Drama at the University of Gothenburg. She was awarded the honorary doctorate for her research on seventeenth-century music by composers like Buxtehude and Düben, each with important connections to Sweden, as well as for her contribution to the organ research at GOArt at the University of Gothenburg, and her much appreciated engagement in teaching and advising of a generation of doctoral candidates here. This Festschrift is edited by two of those former students, Joel Speerstra and Johan Norrback, in collaboration with her colleague from Eastman, the musicologist Ralph P. Locke. Prof. Snyder established the first peer-reviewed online journal of musicology, “The Journal of Seventeenth-Century Music,” and in that spirit, we honor her with a digital Festschrift that will be published serially throughout her entire 80th birthday year, starting today February 28, 2016. This Festschrift will contain tributes from friends and colleagues as well as articles from the following authors (among others!):